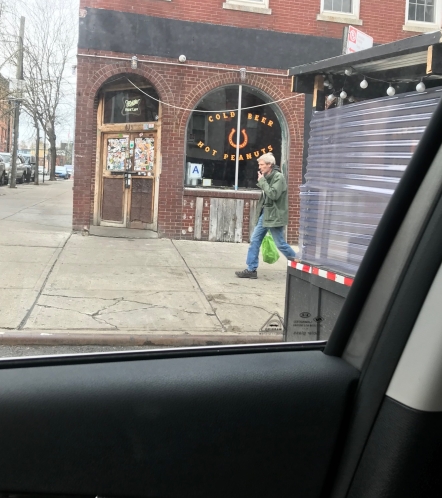 I was sent on an errand into Williamsburg (Williams-boyg?), Brooklyn, early this morning (by the missus).  I don't remember a drinking establishment touting hot peanuts in its window before, but there you have it.  Right up there–equal billing with the beer.

It was peaceful driving through Ridgewood and Bushwick and then Williamsburg, as the woke city woke from its slumber on this Saturday morning.  Probably a quieter than usual Saturday, since it's Easter weekend.  I was reminded of this great song by Grace Jones.

Just the Apple stretching and yawning,
Just morning,
New York putting its feet on the floor.

It is a city that never sleeps, of course, but it does power down a little in the wee small hours through the early dawn.

I know that there are too many internal combustion engines in the world.  For sure there are too many in New York City.  Parking is a nightmare, and of late it has become Death Race 2000 out there, as people, since the pandemic, continue to stay away from the subway and the buses and opt to drive instead, clogging the streets.  Constant traffic jams and frustrated drivers is the new normal, and that's saying something in this town!

But on that topic, and even though this is one of the few places in the US where you can get by without a car, you only see the tip of the iceberg of this huge beating-heart of a metropolis if you depend completely on the subway and a bus or two to get around.

Long ago, in another chapter of my life, in the late 80s, early 90s, a late-night solo drive around the five boroughs was a great way to find the peace that I briefly felt again this morning.  No destination, just the road, the beauty of night-time Manhattan always somewhere in view.

Later, in our days of car seats, it was also a great way to get a child to nod off.

Maybe I should start a regular feature in this blog called Cities Within Cities.  There is an infinite number of layers to this city, I am constantly discovering new facets and new frequencies here, from behind the wheel of my car.  And there is never-ending re-birth, so there'll always be a new finding to note.  So should I? Let me know what you think here. 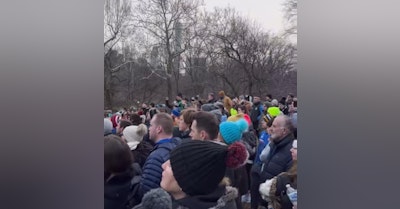 The Adaptation of the Irish American Identity.

It could be argued that the Irish American identity is an endangered species.  Why so, you ask?  Because of the changes in the flow of perman…