Legalizing the Irish: our May centerpiece. 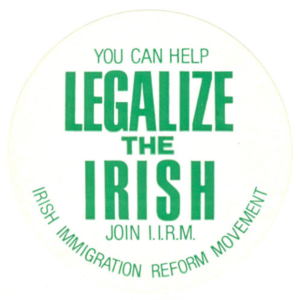 It's always been my intention to make the telling of this epic story, and the story of one of its main protagonists in particular, the centerpiece of an episode of this podcast, and now, in the merry month of May, in episode 9, season 1, it has come to pass.  I'll get to the point...

It's the story of how, in the late 1980s, a small group of Irish activists in New York became the catalyst for a nationwide grass-roots movement that fixed the biggest problem their community faced at that time; an estimated 50,000 newly-arrived Irish immigrants were being forced to live undocumented in America's shadows.  This band of upstart agitators called themselves the Irish Immigration Reform Movement (IIRM), and two of its leaders were to gain the respect of some of the most powerful lawmakers in Washington DC.  And these two lads, Sean Minihane and Pat Hurley, from Skibbereen, County Cork, in Ireland, were barely 25 years of age, if that, when they got started.

Maybe it was because the Irish, in the 19th century, were the first to hold America true to its own definition of democracy, transferring political power to Roman Catholics, but these two young Irish men were hard-wired to understand the power of the ballot box.

The efforts of the IIRM, with activist Irish Americans in every state firmly behind them, applying pressure on legislators locally, culminated in the US Immigration Act of 1990 and its key provisions to provide the undocumented Irish with green cards, a program we now refer to as the Morrison Visas.

October 1991 saw the first running of the program, allowing a brief one-week window to send applications by mail to the State Department.  It was a lottery program with no individual cap on the number of applications.  That month, thousands went to a post office in Merrifield, Virginia, determined to beat the odds by getting as close as they could to the door of the State Department with sack-loads of applications.  Knowing this, postal workers at Merrifield had put large baskets in front of their facility to collect the oncoming deluge.  Even then, it was at times chaotic, even dangerous, as the crowd surged forward, throwing envelopes over the heads of others into the baskets, in what resembled a ticker-tape parade.

It's a story that has been told, just not often enough, or accurately enough maybe, because success has its thousand dads, and failure is but an orphan.  And it hasn't been told for a while.  So my hope is to give the story some legs again, through this podcast.

In so many ways, this achievement was a capstone on a remarkable decade in the recent history of the Irish nation, if the relative concept of recent can hereby stretch to span 40+ years.  When it comes to the beneficial effects the Morrisons had on the Irish psyche, it's right up there with Ireland reaching the World Cup finals in Italy that same year, 1990.  Seriously.

Now, since the history of a people cannot exist without the actual people, this story is really about the crowning glory of a generation of Irish that came of age in the 1980s, a critical mass of iconoclasts that respectfully, and with kindness, almost stealthily, closed the harsh, un-Celtic theocratic chapter of Ireland's journey, and wrote the introductory paragraph for the next, allowing Ireland to turn its page from 'under-developed', almost a mockery, to 'developed', with a formidable prowess in the modern world.

Just as Tom Brokaw labeled the Americans of World War II its greatest generation, there is a similar case to be made for calling the generation that did their Leaving Certificate* somewhere between, say, 1973 and 1983, Ireland's greatest generation.  I did mine in 1982, by the way.

Given Ireland's initial conditions in those days–a dysfunctional self-image with the root cause of this dysfunction looming large just next door–it was no accident that this story happened in America, long the enabler of Ireland's self-realization and her pride.  Her 33rd county.

It was no accident especially because somewhere around the middle of the decade of the 80's, the bottom fell out of the Irish economy, and a legion of well-educated youth, who'd somehow been led to believe that emigration, for the first time in over 130 years, was not inevitable, streamed out of Ireland.  And where did the bulk of them, at some point, end up? In the US.  And for the first time in those 130 years, the default immigration status of an Irish person landing at JFK or Logan quickly changed to undocumented, out-of-status, call it what you will (but don't call it illegal, we don't do that). In a very short time, the in-flow built up to a massive reservoir of crisis, that needed to be acknowledged by Irish America, and solved.

Enter the IIRM.  And they caught lightning in a bottle.

This month, our centerpiece, Sean Benson, from Naas in County Kildare, walks us through the story of the IIRM, from his vantage point.  And Sean was in the thick of it all, from the earliest days of the IIRM.  Much and all as he downplays it, Sean can be credited with coining the slogan 'Legalize The Irish', the central call-to-action of the IIRM, and he will explain why it was so effective.  ('Legalize The Irish' was adopted later by another Irish immigration lobbying group, it was that good.)

He will tell us too how he is proud that the Immigration Act of 1990 benefitted many who were not Irish, and might not have passed without the IIRM, that the Irish thoroughly deserved the deal they struck for themselves, and how he was ultimately disappointed the Irish did not look after themselves even more so, when they had the chance.  Because he foresaw the emergence of another wave of undocumented Irish, and this has come to pass, with little hope of new laws to help them in the toxic political climate surrounding immigration today.

He will also tell us how he became the first Executive Director of New York's highly-regarded Emerald Isle Immigration Center, the social services wing of the IIRM, and how he led it through its embryonic stage, something he is most proud of.

An in-status Irish community in the US in the 90s is often cited as a huge contributing factor to the Celtic Tiger, and even to the peace process for Northern Ireland.

The Immigration Act of 1990 may have been as much about legitimizing the Irish nation globally, as it was about legalizing them in the world's most global country.

It certainly was a great generation, that first found its voice in America.

Further reading and resources are available at Glucksman Ireland House.

From the newspapers of the day:
Washington Post
LA Times

*A set of exams that Irish high-school students take in order to graduate. 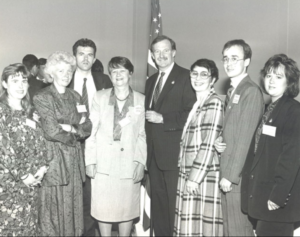 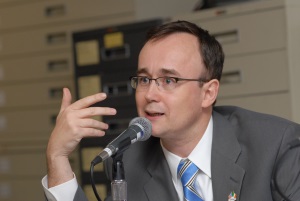 Sean Benson, reminiscing in 2006 at NYU  - photo by Elena Olivito 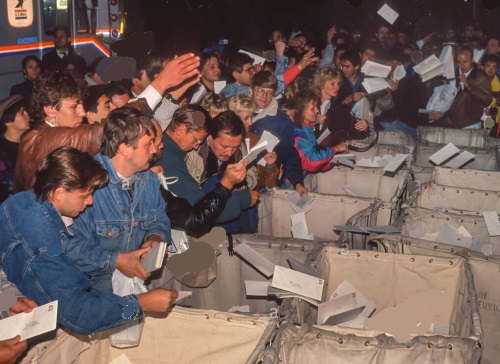 The hectic scene at the post office in Merrifield, Virginia, in October 1991 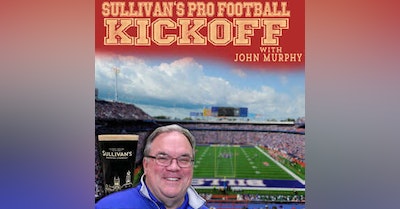 And you may find yourself...

Found myself this week on a podcast devoted to (American) football, the Buffalo Bills, and Sullivan's Beer (https://www.sullivansbrewingcompany.com/).Go … 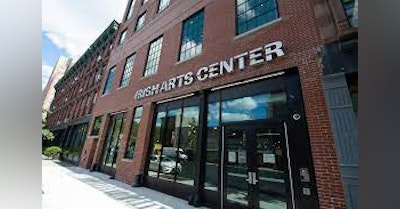